One ouf our tasks for Design Thinking was to design and implement two so-called “provocative requisites”. The idea is to put up an artifact somewhere in public space, where it will provoke interaction, or discussion, by passers-by. One initial idea, as we want to create a game to (re)discover Seestadt, was to distribute small, 3d-printed puzzleboxes (also known as cryptex). However, they would have required a substantial degree of manual interaction, and with the pandemic going on, we figured such a physical interaction would deter people from actually interacting with the object.

Instead, I figured that an object that was unexpected in public space, paired with a QR-Code, might still do the trick. Cue Seelina, our 3d-printed octopus: 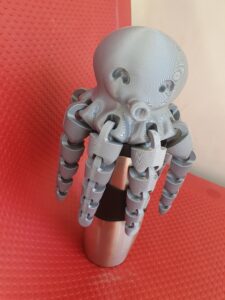 I already had Seelina at home, which is basically why I got the idea – and which meant that we would save some time compared to having to 3d-print an object of her size. And indeed, when we tested her in the wild on a sunny Sunday noon, people did interact with her quite a bit. Unfortunately, as that was supposed to be only the test-run, I did not take pictures or videos of the people interacting with her – and on our second visit to Seestadt, when I planned on documenting the whole thing, and we had a corresponding website set up, only one person interacted with her. The main difference was that on the first day, it was pretty warm and sunny, compared to the second run, where it was cold and extremely windy – a couple of times, Seelina was literally blown off her spots.

A real pity, but that’s how research goes, I guess.