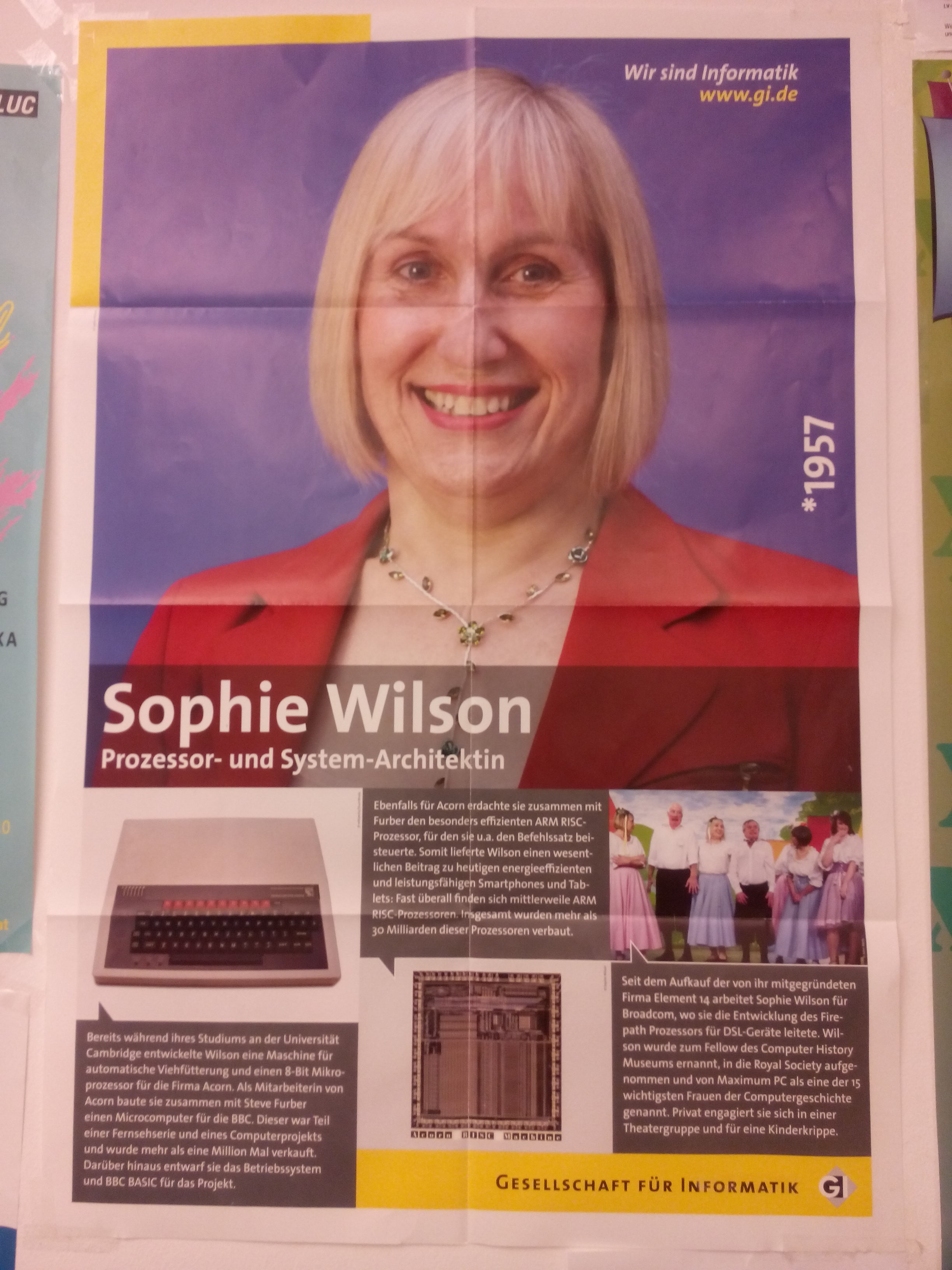 Sophie Wilson is a British computer scientist known for designing the instruction set of the ARM RISC-processor. This processor nowadays is an important part of most mobile devices, as it makes tablets and smartphones faster and more energy efficient.  She studied University of Cambridge and during her time as a student already developed a machine to automate cattle feeding as well as an 8-Bit-Microprocessor for Acorn. Later on, she and Steve Furber built a microcomputer for the BBC while working at Acorn.

Sophie has been named a Fellow of the Computer History Museum and was accepted into the Royal Society. Maximum PC (http://www.maximumpc.com/) in 2011 named her one of the 15 most important women in computer history. The picture shows poster printed by the german “Gesellschaft für Informatik” (https://en.gi.de/) as part of the series “faces of computer science”, detailing her career. Other persons featured in the poster series are Alan Turing, Ada Lovelace, Joseph Weizenbaum and Grace Hopper.

Sources for this article were the pictured poster and the Sophie Wilson wikipedia article.

A short update on what I’ve been up to:

So my plan for the next week is to get the pictures from Italy sorted and write about that a bit.
Also, if you want to see what happens during the next days, follow the vcbm twitter account that I’m curating!

It’s been quite a while since I wrote the last RMS post, but that’s in parts due to my work for FemCamp Wien, so Feminism’s share in my life wasn’t reduced by even a minute 😉 Also, this post does happen to be posted not on a Sunday, because hell, I wrote it, and I’m happy about finishing it, and now here it is. Enjoy!

So, welcome again to the Role Model Sunday articles! This time, I’d like to talk a bit about Emmy Noether, a German mathematician. She is best known for her contributions toward the field of abstract algebra and theoretical physics. Pavel Alexandrov, Albert Einstein, Jean Dieudonné and others called her the most important woman in the history of mathematics. When she died, her obituary in the NY Times was written by Albert Einstein. Part of his theory of relativity are based on Emmy Noether’s work in the theory of invariants. Her work also helped develop ring theory into a major mathematical topic, and inspired many of her students and colleagues. Much of her own work was published not under her own name, but theirs.

Emmy’s father was Max Noether, also a mathematician, and professor at the University of Erlangen. Dismissing her initial plans of becoming a teacher of French and English, she studied mathematics in Erlangen. As women were excluded from academic positions at the time, she had to work without pay for 7 years after completing her dissertation in 1907.

In 1915, she was invited to the University of Göttingen, teaching courses as an assistant to David Hilbert. Her habilitation was approved of in 1919, allowing her to teach using her own name. Part of the discussion on if she should become a Privatdozent has been quoted as follows:

One faculty member protested: “What will our soldiers think when they return to the university and find that they are required to learn at the feet of a woman?”
Hilbert responded with indignation, stating, “I do not see that the sex of the candidate is an argument against her admission as privatdozent. After all, we are a university, not a bath house.”

Emmy Noether spent the winter of 1928-1929 in Moscow, coming in touch with and supporting the Russian Revolution and its ideas. Although politics never were that important to her, this interest of hers lead to her eviction from a pension lodging after people complained about a “Marxist-leaning jewess”.

In 1933, her jewish roots were the reason for Emmy Noether’s expulsion from teaching at University of Göttingen. For her, and other jewish professors, friends around the world tried to find new teaching positions. Two universities contacted Emmy Noether: Somerville College in Oxford (UK), and Bryn Mawr College in the United States. A grant from Rockefeller Foundation made it possible for her to take the position at Bryn Mawr, and she started to work there in late 1933.

She died in 1935, after surgery to remove a tumor from her pelvis.

My sources for this post were wikipedia and the MacTutor History of Mathematics at St Andrew’s College.

In the last weeks, I spent a lot of time working for FemCamp Wien, and also for the CS Student’s Union, so in order to still have some free time, there was not a lot of time left for Role Model posts…

But in my free time, I did notice some very nice details when out and about. Enjoy!

As you may have noticed, there haven’t been any Role Model Sunday articles on the last 3 Sundays. This is mostly due to my doing other stuff on those Sundays – climbing at Peilstein, Geocaching at Löwygrube, and Biking around Vienna with my parents, to be exact 🙂

I’m trying to catch up on those missing articles and get back to posting soon. My next role model will be Emmy Noether, an important mathematician – stay tuned!

A couple of weeks ago, I paid a visit to Cobenzl, a small mountain in the northwest of Vienna. If you ever go there, you’ll be passing through Döbling and Grinzing, two former suburbs of Vienna which are now part of the city. In part they still look very much like the winegrowing villages they used to be, and I thougth I’d share some pictures with you 🙂

This, err, last week’s role model was pointed out to me – and about 180 other students – by our teacher in Theoretical Informatics and Logic (I might even write about her at some point): Sheila Greibach, researcher in formal languages, compiler theory and computer science.

In the context of the TIL lecture, Sheila Greibach was mentioned for establishing the normal form (aka Greibach normal form) for context-free grammars.  She also works on properties of pushdown automata, and decidability problems.

After earning her A.B. and A.M. degrees at Radcliffe University in 1960 and 1962, she achieved her PhD at Harvard University in 1963. The title of her PhD thesis is “Inverses of Phrase Structure Generators”.

She continued to work at Harvard at the Division of Engineering and Applied Physics, until she moved to the UCLA, where she has been professor since 1970.

Other than the Greibach normal form, she is also known for Greibach’s theorem, stating that certain properties of formal language classes are undecidable.

More information on Sheila Greibach can be found at wikipedia.

This week’s role model was brought to my attention by Fachschaft Informatik, a group of students representing the Comuputer Sciences students at my university, helping with problems concerning curricula, courses, and so on. One of the rooms provided and used by FSInf is the Anita Borg room.

Anita Borg was a self-taught programmer, focusing on operating systems and memory systems. Upon realizing at a symposium in 1987 that there were incredibly few women in computing, she became an advocate for technical women. She founded a mailing list called Systers, which brought together women in technology. In 1994, together with Telle Whitney, Borg founded the Grace Hopper Celebration of Women in Computing, a conference by and for women in computer sciences. In 1997, Borg founded the Institute for Women in Technology, aiming to increase the representation of women in technical fields and to enable the creation of more technology by women. Anita Borg’s personal goal was to achieve a 50% representation for women in computing by 2020.

While reading up on her life, the second most interesting fact for me was that the mailing list she oversaw, while primarily focusing on communication of experts on technical things, tackled non-technical issues from time to time. For example, when in 1992 a Barbie doll hit the market that said “math class is tough”, the protest that started with the Systers list played a role in getting that phrase removed from Barbie’s microchip. This very much reminded me of a Simpsons episode, Lisa vs. Malibu Stacy. The most interesting fact was that Anita Borg obviously was a very active, motivated fighter for women in technology. This is a trait I very much like in people – talking about things might be interesting, but to actually change the state of something, things must get done.

For more information, go read up at wikipedia (where I also found her picture). 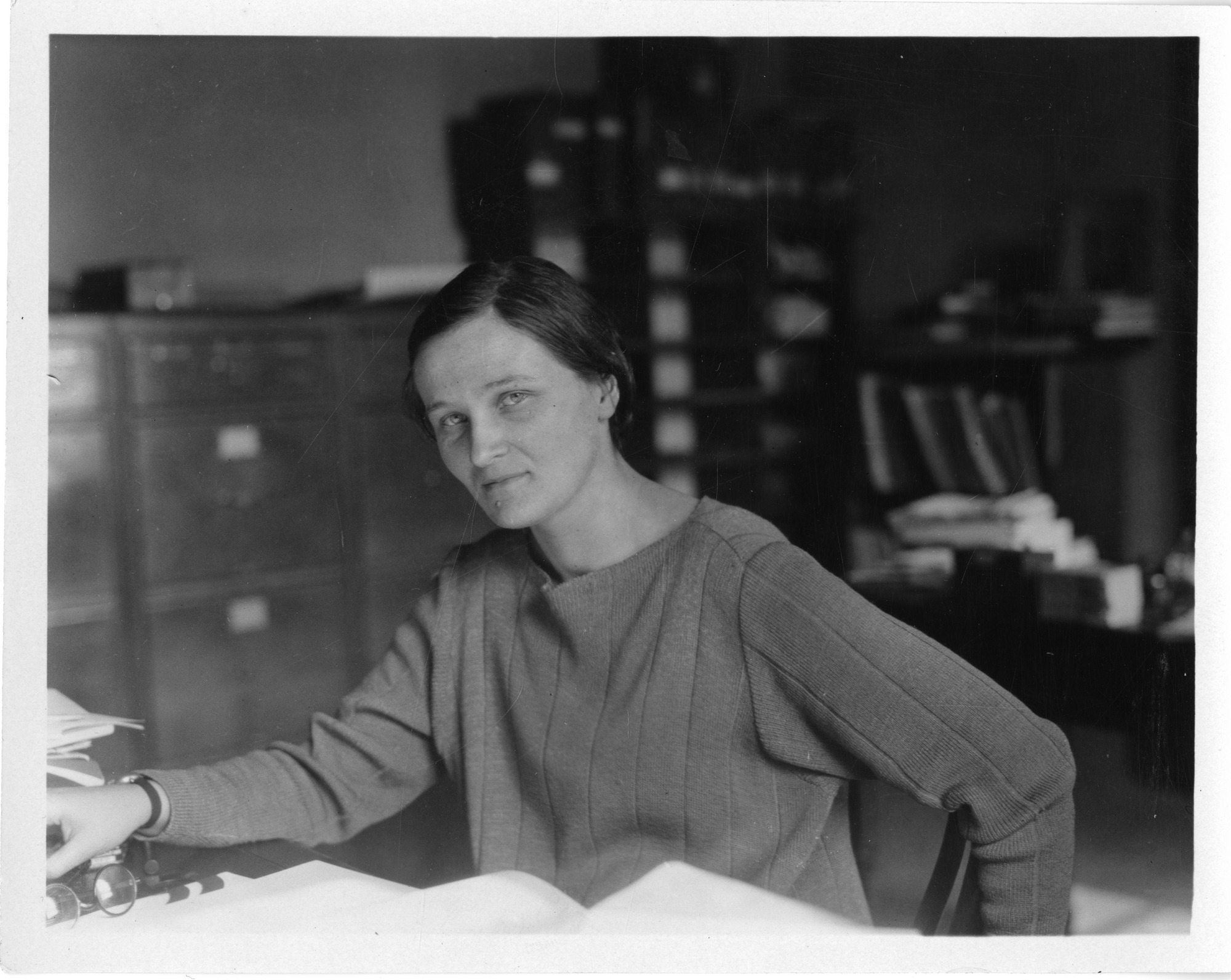 Without even being awarded with a degree after completing her studies at Cambridge University (because women only receive degrees from Cambridge since 1948!), Cecilia Payne‘s dissertation was “undoubtedly the most brilliant Ph.D. thesis ever written in astronomy.” according to astronomer Otto Struve.

After her father died when she was four years old, her mother had to raise Cecilia and her 2 siblings on her own, thus deciding not to spend money on Cecilia’s college education, but on her brother’s (who became an archeologist). In 1919, Payne won a scholarship to Cambridge University, where she started to study botany and later on also physics and chemistry. Her London school did not teach either physics or chemistry, but botany, so this is where she discovered her first field of interest.

Realizing that she would not be able to work in research, but only as a teacher, in the UK, she decided to move to the US on a grant encouraging women to work at Harvard Observatory. She was the 2nd woman to work there, following Adelaide Ames.

In her work, Payne accurately related the spectral classes of stars to their actual temperatures. Her thesis established that hydrogen was the overwhelming constituent of the stars, and thus the most abundant element in the Universe.

Officially not having an official position, Payne remained scientifically active as a technical assistant to Harlow Shapley (the Director of the Harvard Observatory) from 1927 to 1938. When she was at one point considering to leave Harvard because of her low status and poor salary, Shapley made efforts to improve her position. In 1938 she was given the title of “Astronomer”, which she later asked to have changed to Phillips Astronomer. Until 1945, none of the courses she taught at Harvard were recorded in the catalogue.

For this week’s Role Model, my thanks go to the women’s department at TU Wien’s Student’s Union. Part of their campaing for yesterday’s International Women’s Day was to rename some of the most used lecture rooms at TU, giving them names of female scientists. This is how I found today’s Role Model: Rózsa Péter.

Rósza Péter attended Pázmány Péter University (the oldest and largest university in Hungary, later renamed Eötvös Loránd University) starting in 1922. She at first wanted to study chemistry, but soon discovered that her true passion lay with Mathematics. Graduating in 1927, she started to work as a tutor and teacher at high schools, but also started her graduate studies.

When the Fascists took over in Hungary in 1939, Rósza Péter lost her permission to teach, due to her jewish roots. Still researching and writing during the war times, she published “Playing with Infinity” in 1943, where she discussed number theory and logic for lays.

In 1951 she published a monograph, Recursive Functions, and in 1955, she became a professor at Eötvös Loránd University (her renamed alma mater), until her retirement in 1975. In 1976, she published Recursive Functions in Computer Theory. This book was the 2nd Hungarian book on mathematics to be published also in the Soviet Union, as the matter was considered essential to the theory of computers.

Some information can be found at wikipedia,and the websites of Agnes Scott College and the San Diego Supercomputer Center published short biographies referencing more interesting sources, too.