One of the final hand-ins for Design Thinking was a Narrative Poster which was due this last week. Usually, this would be created using some kind of vector graphics software, physically printed and presented in class with hand-in of pictures for grading. But, these being a “extraordinary times” (ugh, that phrase), we had to switch to a full-blown digital way of creating and presenting the poster.

In our group, we decided to use Miro, because some of us already had at least a bit of experience using it. Also, it is pretty straight-forward, and works well for collaborational tasks.

It was one of those assignments that you put off for quite some time, fearing that it will take immense amounts of time to complete, but when you finally sit down with a colleague (via jitsi, of course, not physically in the same room), and go through the requirements, and talk about what there is to do, and split up the jobs … you’re pretty much done within one hour.

Here you go, this is the story of how we worked on #SeeSpiel (click to open the file): 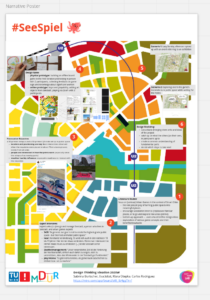 The poster shortly summarises the individual steps we took during the course. We used a map of Seestadt as the backdrop, as it is also vital to our project. Each phase of the project – so far – is positioned along Sonnenallee, which is the big avenue circling the Aspern lake. The narration starts at U2 station Seestadt, south of the lake, then follows Sonnenallee clockwise until it arrives back at the northern side of U2 station Seestadt.

The literature reviews and expert interviews are each summarised shortly, using quotes from the expert interviews and learnings from the reviews respectively. For the provocative requisites, we also summarised our learnings, and added two pictures. The part on the design game talks about both a physical game prototype and the digital design game. The two scenarios we developed are shortly described, and then we’re already at the final stop: the design workshop.

I’ll write short posts about the phases I haven’t covered yet, and probably will also put up the final report once we’re done, so if you’re interested in more of this, do come back soon 😉